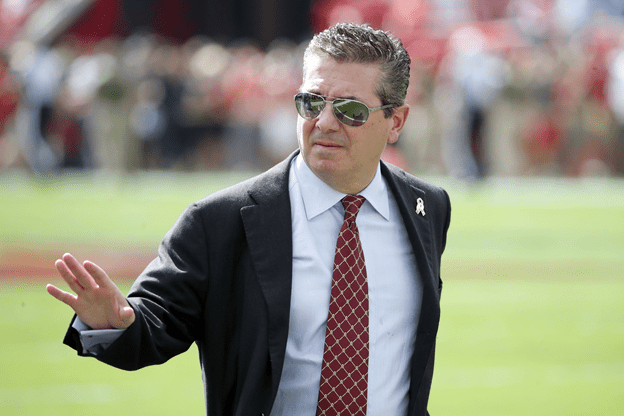 Dan Snyder is most well-known as the owner of the Washington Football franchise, but his impact on the community extends far beyond this sphere. Snyder is a lifelong resident of the Washington, D.C. area, and his passion for the area’s NFL team has roots in his childhood. He spent his early adult years as a successful entrepreneur. Through this success in the business world, this self-made man eventually stood in the position to purchase the NFL team that he loves. After purchasing the Washington Football franchise more than two decades ago, Snyder has consistently maintained his status as a prominent business leader. At the same time, he has maintained the elite status of his football franchise and has been instrumental in raising tens of millions of dollars to support various outreach and charitable programs. These programs have touched the lives of millions of people in the Washington, D.C. area as well as across the country and on the other side of the planet.

After taking an ownership role over the Washington Football franchise, Dan Snyder quickly jumped into action by using his elevated position to create the Washington Charitable Foundation. At the local level, this organization has participated in or initiated various programs encouraging literacy in elementary school students. The Read Program has positively affected almost 40,000 young students through more than 100 events and on-campus workshops over the years. The foundation has also participated in wellness and health initiatives for middle school students in the local community, and these programs have influenced more than 12,000 young lives. Another local program that has been supported by the Washington Charitable Foundation is known as Loads of Love. With support from Snyder’s foundation, this important program has been able to expand to support students in more than 80 local elementary, middle and high schools. Loads of Love provides children from disadvantaged homes with clean clothing to support a higher level of success in the classroom.

Outside of the United States, Dan Snyder has used the foundation to support various communities after they have been torn apart by natural disasters. Efforts include sending much-needed supplies to the Gulf Coast states after Hurricane Katrina in 2005, Indonesia and Thailand after a tsunami in 2004 and specific Caribbean countries after the devastation left behind by Hurricane Matthew in 2016.

Snyder’s focus on improving the local and global communities in various and essential ways extends beyond his work through his charitable organization. He and his wife, Tanya, have also shown interest in other critical causes close to home. For example, this power couple has financially supported the expansion of the Children’s National Hospital in the Washington, D.C. area and the National Center of Missing and Exploited Children. Both of these foundations have been enabled to expand the size of their facilities through the Snyder family’s donations, and they have named the new facilities after the family.

In 2000, the Snyder family has continued to support the community through Black Lives Matter initiatives and throughout the pandemic. Specifically, the couple gifted $250,000 to a social injustice-focused organization. They also contributed $100,000 of their personal funds to the local food bank and supported the establishment of a COVID-19 testing branch.

Previously, the Snyder family has contributed a substantial amount of money to the renovation and restoration of a historic schoolhouse building after it was damaged by vandalism. The family’s efforts have also extended to supporting the Beacon House for at-risk teens, the Salute program, the Gary Sinise Foundation and more.

Altogether, Dan Snyder’s foundation has collected and disbursed more than $29 million dollars to those in need over the years. He and his family have personally donated a tremendous amount of their personal funds, supported NFL-based initiatives and impacted the community in other notable ways. Looking toward the future, Dan Snyder will continue to lead his NFL franchise to greatness while looking for other notable ways to improve the world around him.