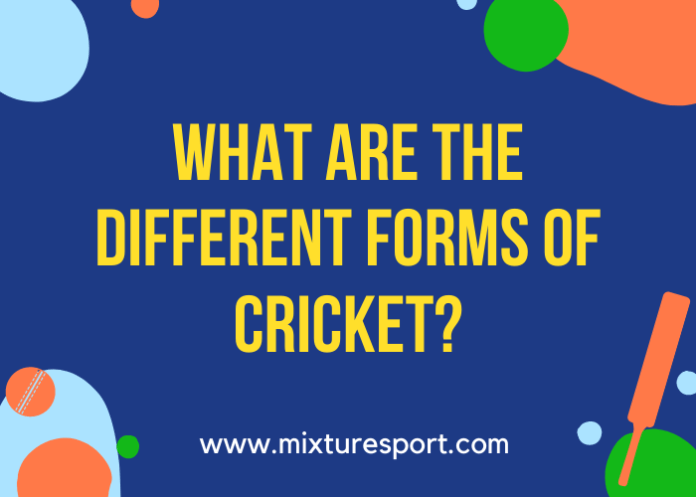 Do you love cricket? Well it can actually be overwhelming at times because there are so many different forms of cricket. I would like to explain some of the most popular types of the game and how each one varies. Maybe you will find the one that is most interesting to you or maybe, like me, you will love them all.

To first define cricket, cricket is a game played with two teams, eleven players on each team. All forms include cricket bats, a ball and wickets. A run can be scored a few ways but most commonly when a batsman hits the ball and then runs to the other end of the cricket pitch and crosses the crease.

The first type of cricket I want to discuss is Test Cricket. Test is considered the original form of the game; Test Cricket matches date back to the late 1800’s. Test games last five days and have no limit to how long each side can bat. Test Cricket is played only between national opponents and there are currently ten teams that participate in Test Cricket they are Australia, Bangladesh, England, India, New Zealand, Pakistan, South Africa, Sri Lanka, West Indies and Zimbabwe. Test is considered the most athletic of all of the games because of the length and amount of games played. Also, a Test game can result in a tie or a draw.

The next two I want to deliberate are One Day Cricket and Twenty20 Cricket. One Day is self-explanatory; it takes just one day to play. The other difference between One Day Cricket and Test Cricket is that each team only bats once and the limit to overs is typically set at fifty. Twenty20 Cricket has only been around since 2003 and was developed in the United Kingdom. It is a form of One Day but has modified rules from the One Day. The major difference is that in Twenty20 has a limit of 20 overs versus 50 overs in One Day. Both of these forms always end with a result. Although 20Twenty is becoming popular, One Day still remains the most popular among cricketers.

In Conclusion, no matter if you are a beginning cricketer or someone who has been playing the sport for many years, there are so many forms of the game that you can easily find a form that fits your lifestyle. Try them all and see which one is your favorite.

Who Will Win Cricket World Cup 2011? A Tarot Cards View

Cricket – Beyond the Boundary