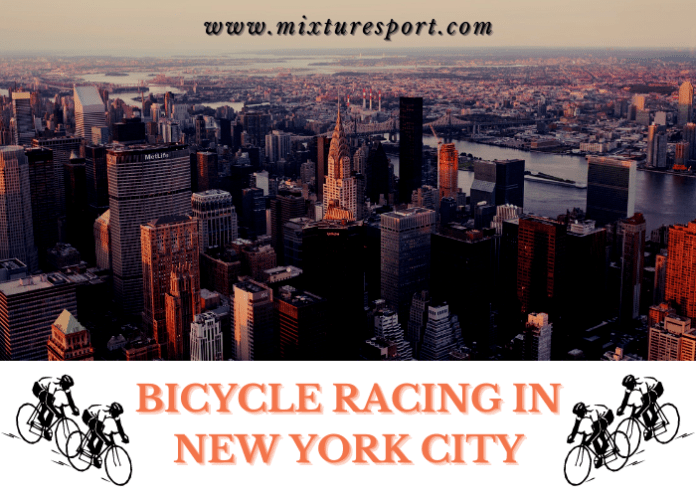 Despite what you might think, there is a vibrant road racing scene in the Big Apple.  The season starts in late February and runs through the end of September.  Most weeks you can race two or three times without having to leave the five boroughs.  Racing in New York was always an underground sort of affair, and though the Internet has made it much easier, it can still be tricky to find the starting lines if you are new to it all.  So if you are interested in racing in Gotham, here is some information that might prove helpful.

As with most races in the United States, New York races are divided into separate fields based on the United States Cycling Federation category system.  The categories range from Cat. 5 for beginners to Cat. 1 for elite amateurs.  Points are awarded for the top placings (how deep depends on the type of race and the number on entrants.)  Upgrades from one category to the next are based on earning a specified number of points in a 12 month period (with the exception of the move from Cat. 5 to Cat. 4 for which you need to race ten times.)   The vast majority of local races in New York (i.e., races to which you can ride your bike) are circuit races consisting of multiple laps around a closed loop.

Typically, there are a combined Pro/Cat. 1/Cat. 2/Cat. 3 field, a Cat. 3/Cat.4 field and a Cat. 5 field.  At some races, there are also separate fields for Women and Masters (i.e., riders over a certain age, usually 35 or 40.)   Each field goes off a few minutes after the previous field and competes for its own placings and prizes.  The P/1/2/3 races are the longest with distances ranging from 30 to 50+ miles.  Depending on venue and time of year, the fields fill up to their limit which can be as many 110 riders.  Such large fields make for some fast racing, and although there are some successful breakaways, many of the races come down to a field sprint.

The bulk of the New York City calendar is comprised of what are called “park races” because they take place in a park.  There are three primary venues.

Central Park (Manhattan): Smack in the center of Manhattan, the six mile Central Park Drive is the primary weekday training ground for the thousands of Manhattan-based cyclists.  The start/finish is on Cat’s Paw hill on the east side, just north of the 72nd street entrance off Fifth Avenue. The loop consists of rolling terrain with short-power climbs.  The east side is flat and fast culminating in a quick descent at the top of the park.  Harlem Hill, a half-mile, big ring climb, starts the west side portion which consists of three additional rollers.

The section past Tavern on the Green as you near the bottom of the park is fast, followed by a slight incline and slight downhill leading back to Cat’s Paw for the finish.  The races take place on the weekend when the drive is closed to traffic.  They are usually 5-7 laps, and start at 6 am or 6:30 am so that they can finish before the park fills.

Getting there by bike: Central Park is bordered by 60th Street to the South, 110th Street to the North, Fifth Avenue to the east and Central Park West to the west.  You can enter from just about anywhere, and once inside, you want to get on the main park drive.  The drive is ridden in a counter clockwise direction so follow the path until you come to the Boathouse restaurant just past the 72nd Street exit/entrance on the east side.  The start/finish is at the top of the hill just past the Boathouse, which will be on your left.

Prospect Park (Brooklyn): A staple for the Brooklynites, the loop in Prospect Park is 3.4 miles long.  The start is on the east side just north of the Lincoln Road exit that leads to Ocean Avenue. The loop is mostly flat with a big ring climb at the top of the park that leads towards Grand Army Plaza and the corresponding downhill at the bottom of the park where speeds can top 40 mph.  As with Central Park, the races take place on the weekend when the road is closed to traffic and early, usually 6:30 am, before the park fills up.

Getting there by bike (from Manhattan): The easiest way to reach the park is to cross over the Brooklyn Bridge.  Once over the bridge, stay straight (although get over to the right) on Adams St./Brooklyn Bridge Blvd.  After crossing over Atlantic Avenue, make the second left on to Dean St. Follow Dean St. to Flatbush Avenue and make a right on to Flatbush.  Take Flatbush to Grand Army Plaza. The entrance to the park is at the top of the circle at Grand Army Plaza. Once in the park, ride in the reverse direction (clockwise) to reach the start/finish line.

Floyd Bennett Field (Brooklyn): No longer active, Floyd Bennett Field was New York’s first municipal airport.  The old runways and service roads now serve as a race course which is 2.3 miles long.  The course is flat and windy with some bumpy tarmac.  Since there is no one else around, there is never any traffic or pedestrians/runners to deal which allows for longer races on the occasional weekend and weeknight races as well.

Getting there by bike (from Manhattan): Again the Brooklyn Bridge is your best bet, and you’ll want to follow the directions to Prospect Park above.  Instead of entering the Park, make a right on to Flatbush Avenue just past the Park entrance.  Stay on Flatbush for a little over 7 miles.  Once you pass over the Belt Parkway, look for the first break in the median to cross over Flatbush Avenue.  There is a bike path that runs against Floyd Bennett Field and will lead to an entrance to the field and to the race course.

The CalendarWith several racing series, the calendar is full most of the year.

The New York City Spring Bicycle Race Series is the oldest racing series in New York. Made up of ten one-day races, the Spring Series marks the beginning of the season.  It traditionally starts the first weekend in March and finishes at the end of April.  Most of the races are held in Central Park and in April, some move to Prospect Park.  This year there was an individual time trial just for kicks.  There is a leader’s jersey, and in addition to individual race payouts, there are trophies and prizes for the overall series winner as well as the series winner in each category.

The Cadence Cup is a series of seven one-day races that take place in Prospect Park.  Spread across the calendar from February to August.  In addition to the overall leader’s jersey, there is a king of the mountains competition as well as a sprint competition.

The New York Cycling Series consists of five one-day races held in Prospect Park held from May through August that have been staples on the calendar for a long time.  In addition to the individual race payouts, there are trophies for the series winners in each field.

The Cadence Tuesday Night Race Series is a season long series at Floyd Bennett Field on, as you might guess, Tuesday nights.  Short and intense, these races are hard and fun.  There is an overall series leader’s jersey, as well as a green jersey for the sprint king.

Every Father’s Day, there is the Skyscraper Harlem Cycling Classic, a four corner criterium on the streets surrounding Marcus Garvey Park in Harlem.  It’s not often you get to race on the actual streets of New York, so this race usually fills up fast and the course is lined with spectators.  This year’s event will be the 36th running.

Horse Racing Partnerships – Getting To Know Them

The History of Supercross Motorbike Racing